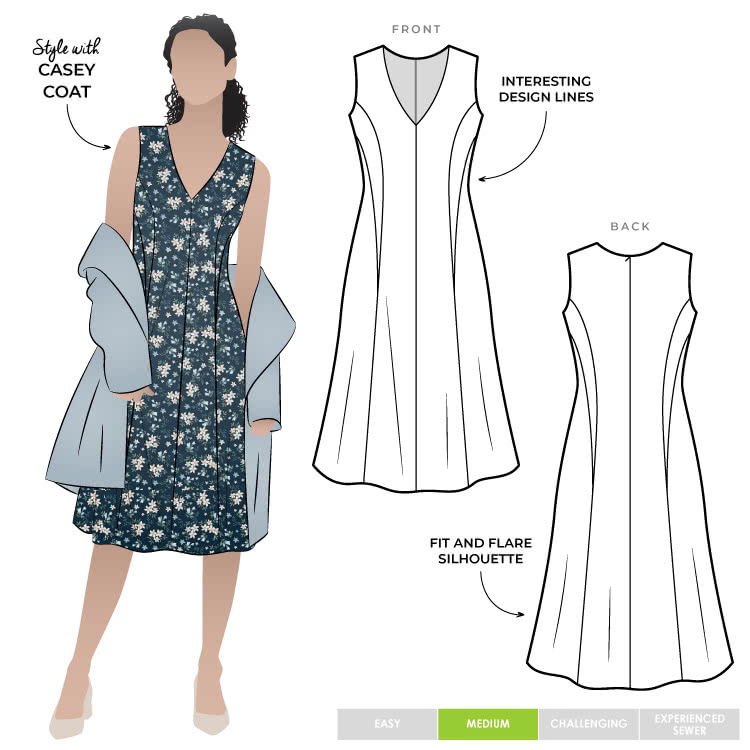 PDF Pattern - Multi-size (Including A0)

Sleeveless fit and flare panelled dress with a "V" neck.

A classic shape with a modern impact. This pattern has been drafted with interesting design lines to achieve a beautiful fit and flair shape. Carnegie is a dress for those who like a fitted silhouette. The neat "V" neck adds to this flattering shape.

The perfect little black dress suitable for that desk to dinner date or that special occasion.

Silk, crepe, rayon or a fabric with a slight natural stretch.

Only logged in customers who have purchased this product may leave a review.

How Do I Know What Size I Am?

Choosing your pattern size is the most important step and we will help you determine this with these easy to follow steps.

Place the tape at the edge of the shoulder. Measure along the top of the shoulder blade/across the highest point of the shoulders to the other edge, following the natural slope and allow an extra finger for ease of any movement.

This point is taken as a circumference at your widest point of your upper arm.

This point is taken as a circumference parallel to the floor at the fullest part of your chest.

This point is taken as a circumference and taken at the smallest part of your waist.

This point is taken as a circumference parallel to the floor at the widest part of your hips.