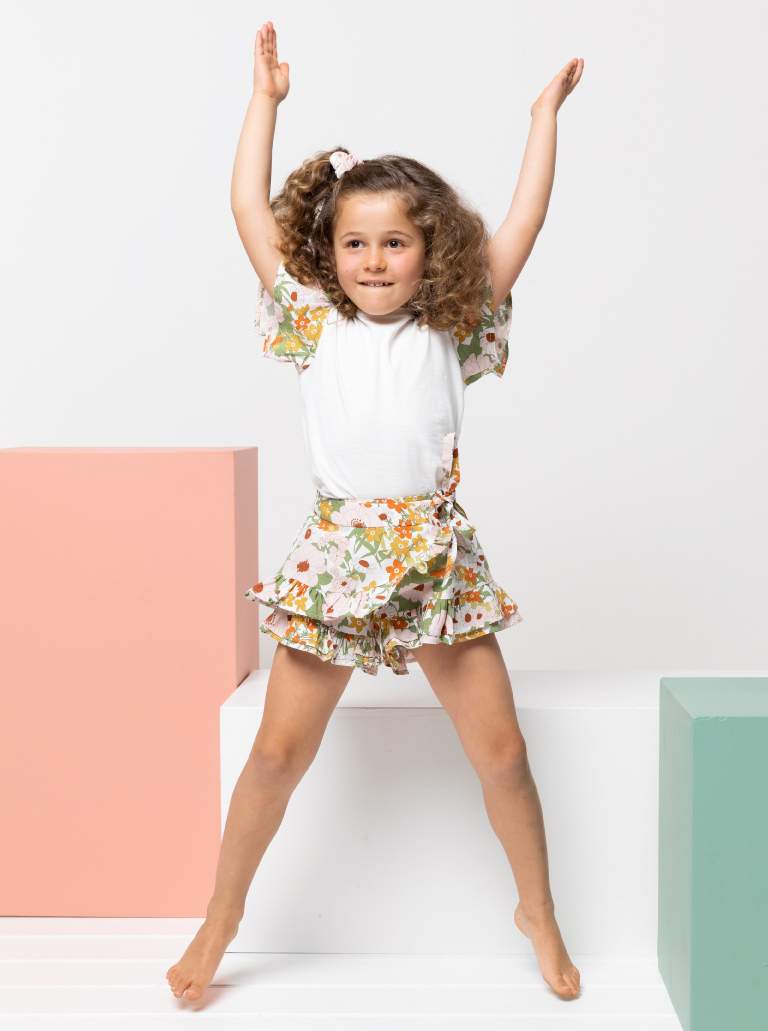 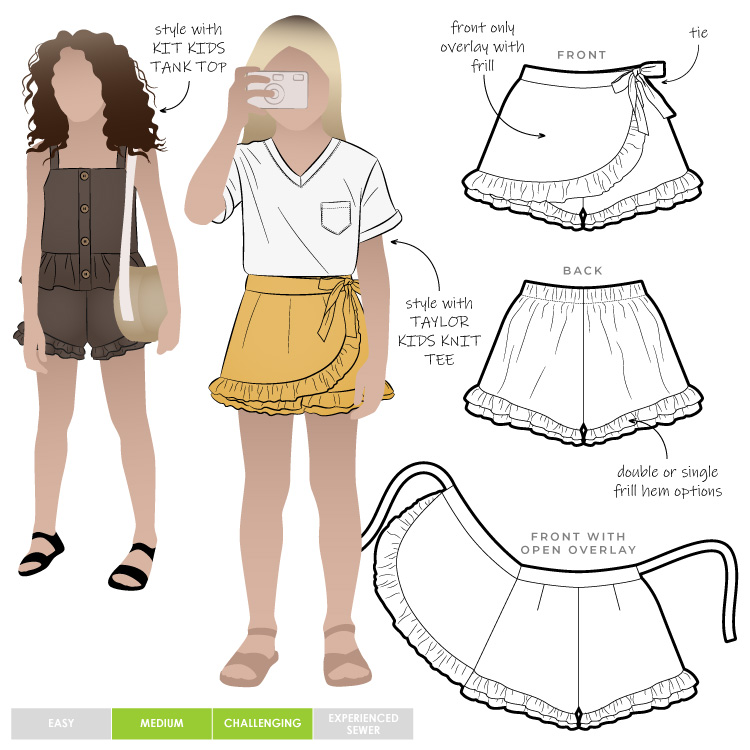 – Cut out all the pattern pieces.

– Mark all the notches on your pattern pieces

– When finished, you should have 20 cut fabric pieces, which together make 11 pattern pieces. 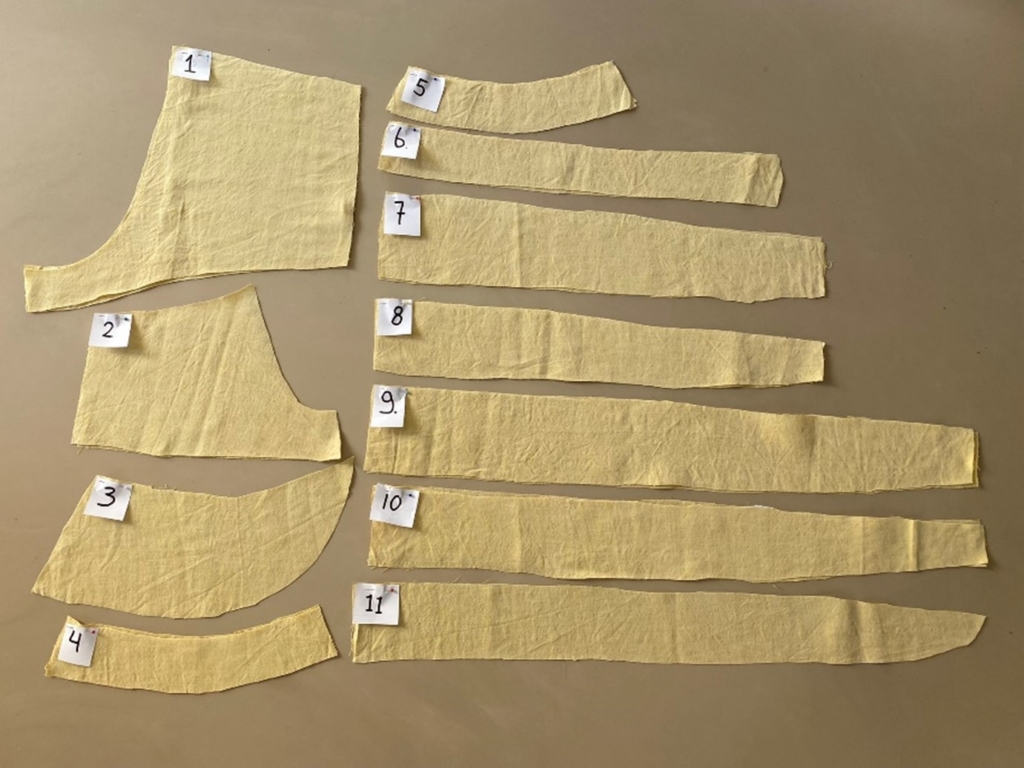 – Take pattern pieces no 6 (2x) and fold the long end, right sides together.

– Sew the length and one short end of the tie.

– Turn out and press nicely.

– Take pattern piece no 11 (1x) and sew 2 rows of large gathering stiches to the straight edge of the overlay frill. Do not cut the end of the gathering stitch too short, so you can use the ends to gather the frill. 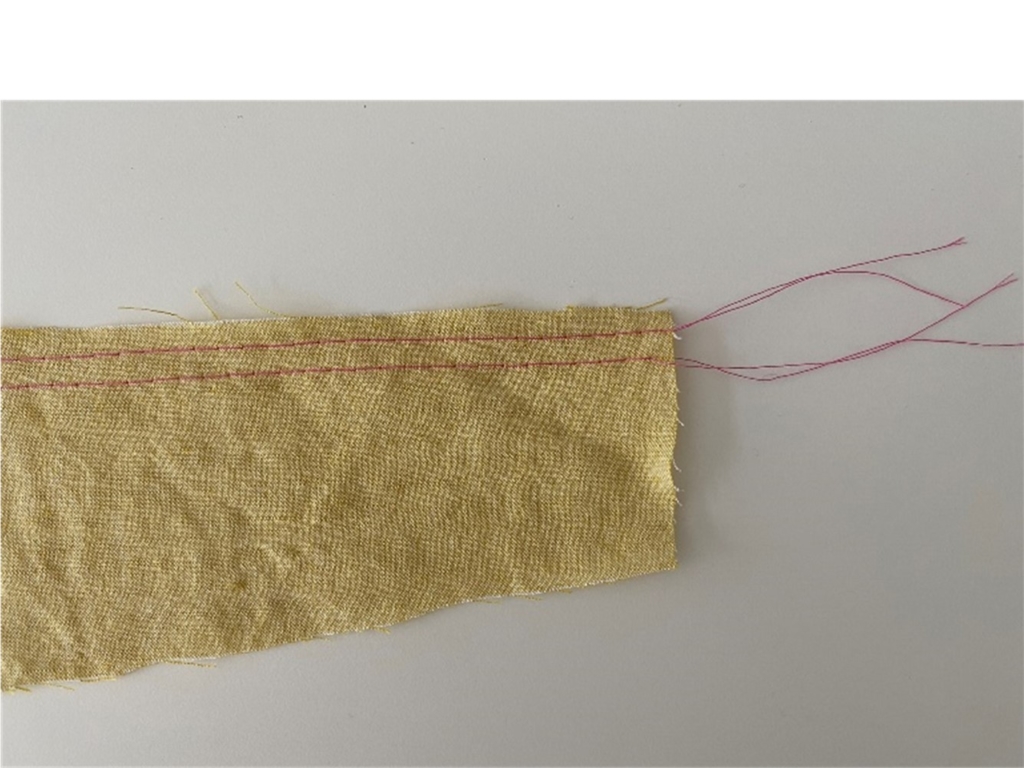 – Neaten the other, rounded end of the overlay frill.

– Gather the overlay frill so it has the same length as the overlay (pattern piece no 3).

– Pin in place and sew the frill to the overlay, right sides facing

– Remove the gathering stitches, finish the seam (for example with a serger) and press the seam up. 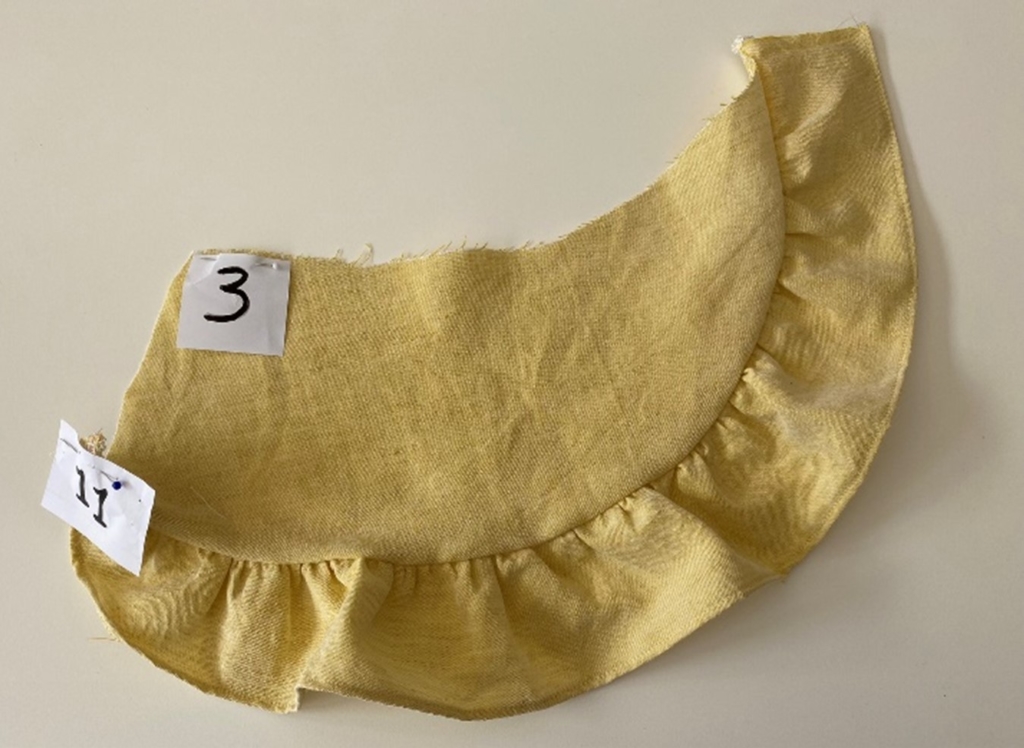 – Take one of the two ties you made in step 1 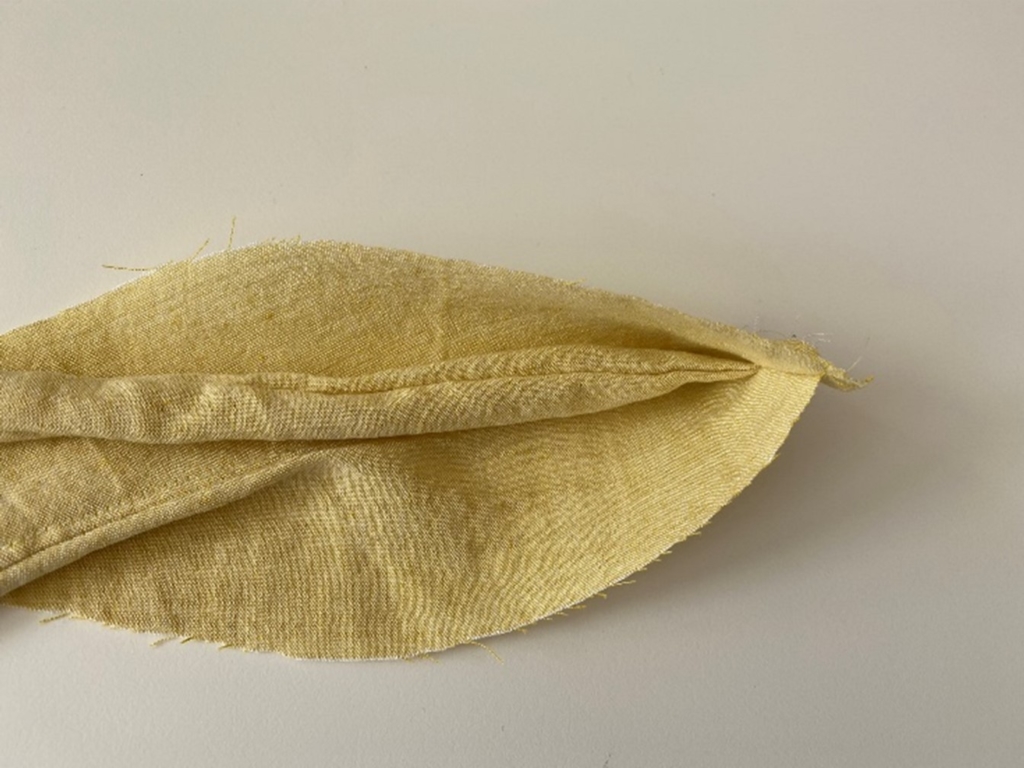 – Sew the short end of the waistband, left side.

– The tie is attached to the left side of the waistband now.

– Pin the waistband to the overlay, right sides facing.

– Sew the waistband to the overlay, turn the inside seam inwards and stitch with a sink stitch.

3: Shorts (When you are making the shorts and not the skort, you can close both side seams. When making the skort, leave the right side seam open, as explained in this tutorial).

– Take pattern piece no 2 (2x) and sew the waist darts. Don’t cut the threads too short so you can finish the darts with a knot to improve a smooth end of the darts. 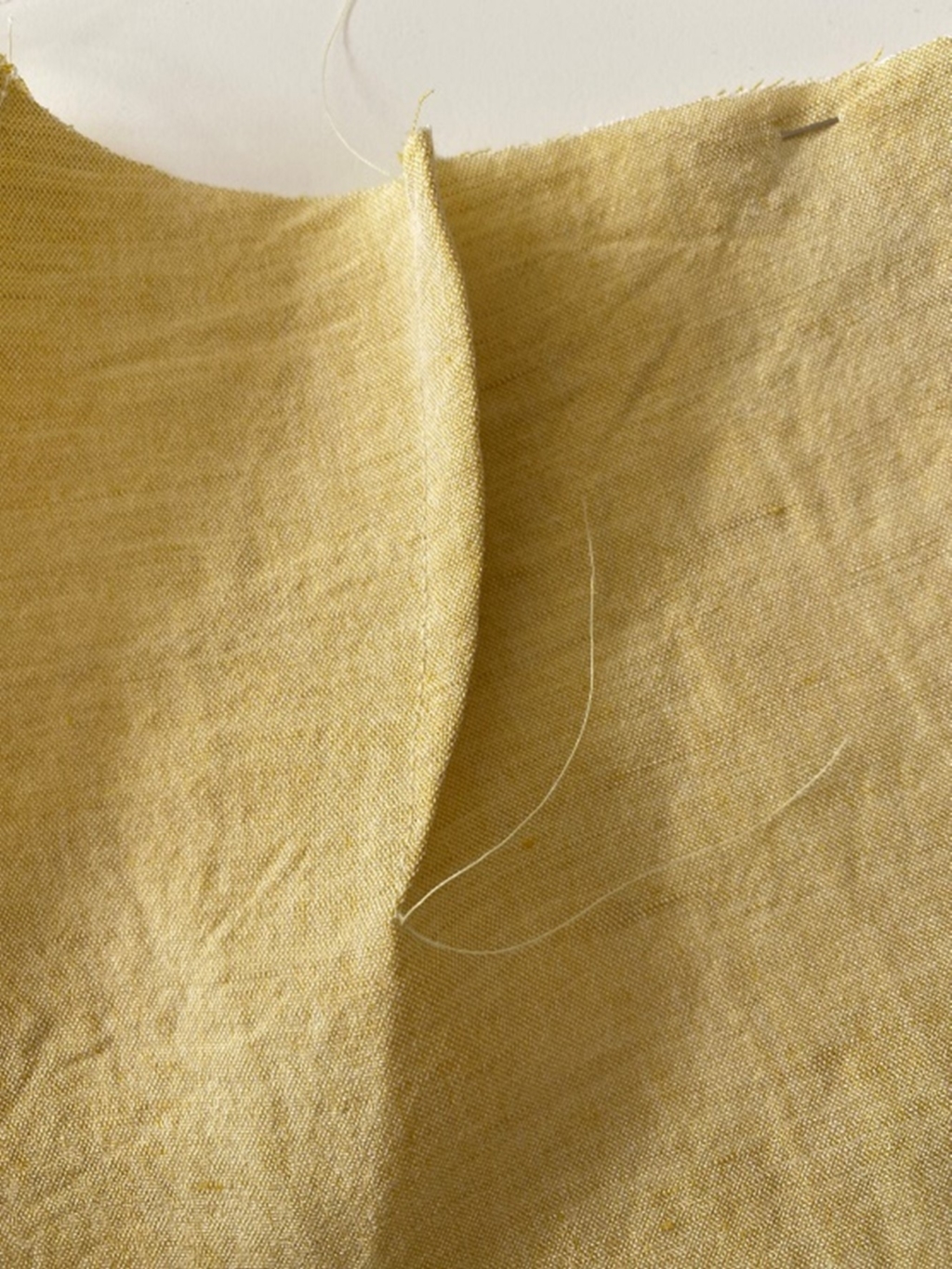 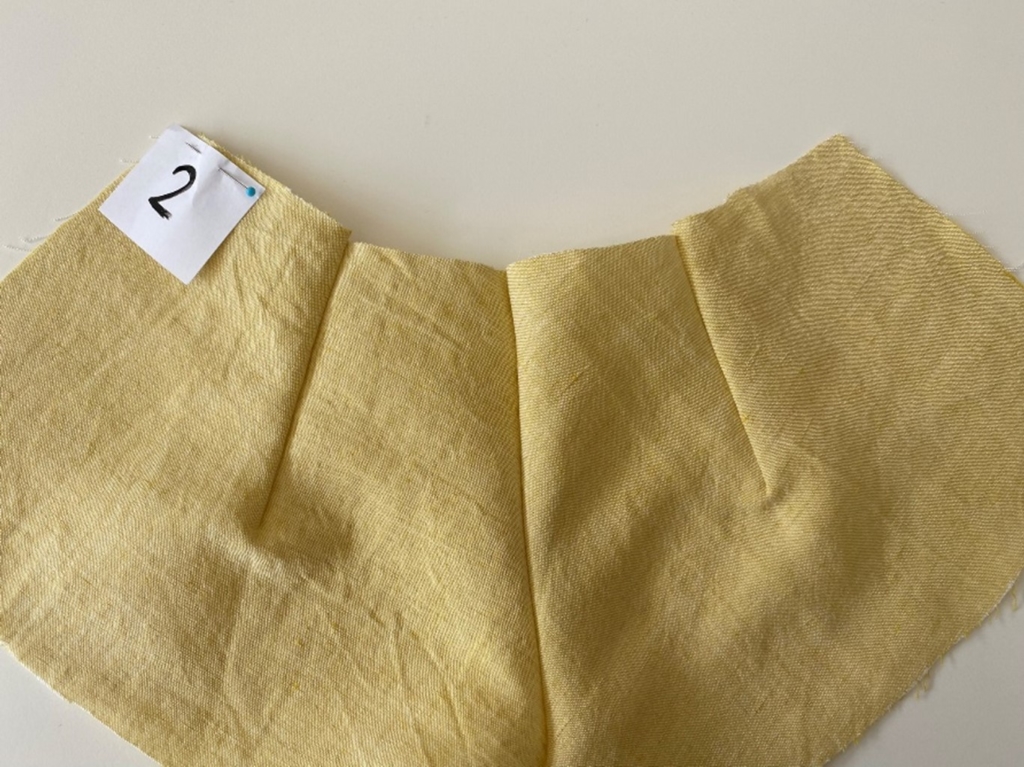 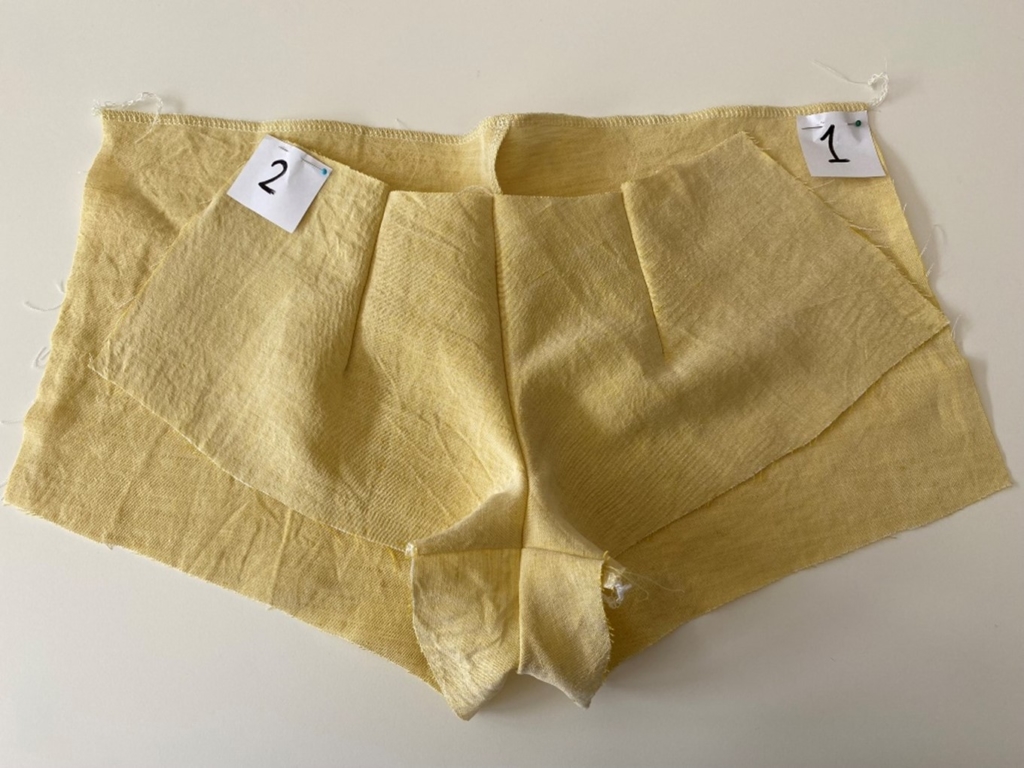 – Fold the top part of the back of the shorts at the fold line to create a tunnel for your elastic.

– Sew and baste the elastic through the tunnel. 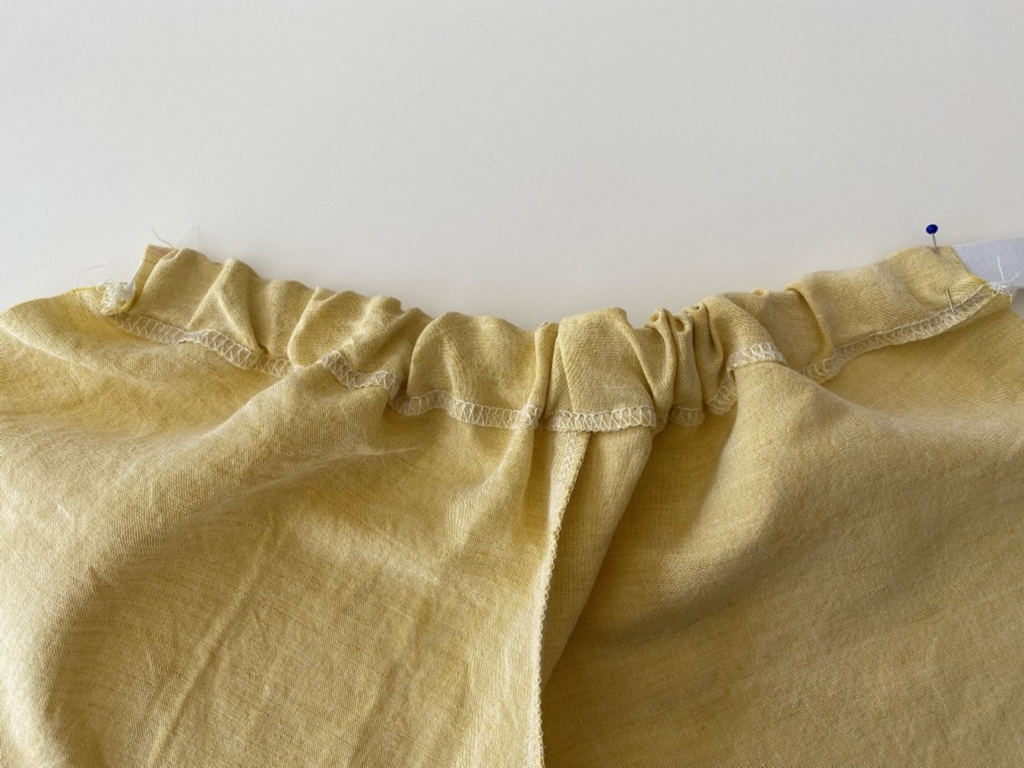 – Take pattern piece no 4 (2x) and sew the long edge, right sides together. 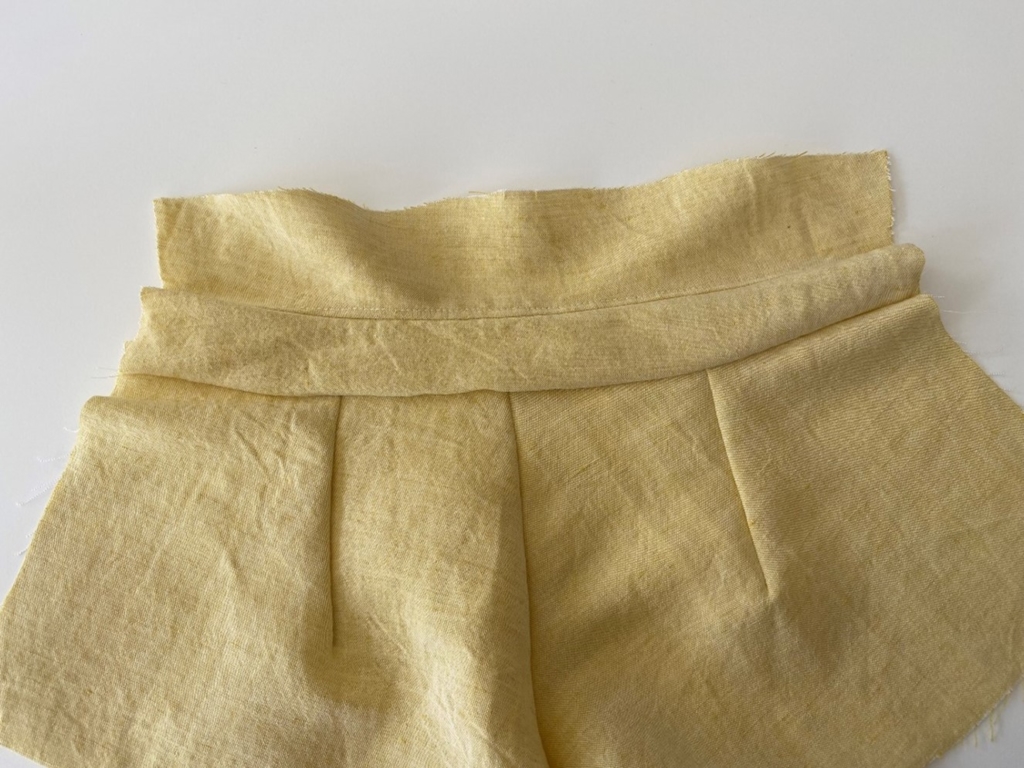 – Sew the inner waistband to the seam of the front waistband. This way the stitch will not be visible on the right side of the shorts. Leave the short ends open at both sides of the waistband.

– Take the second tie you made in step 1.

– Put the tie on the front of the waistband, at the left side, and pin in place. Do not sew it yet!

–  Turn the shorts right sides together and pin the left side seam.

– Pay attention to the tie, is it still in place, sandwiched in between the left side seam of the  front and back waistband.

– Make sure you stitch the elastic firmly in the side seam.

– Sew the left side seam. 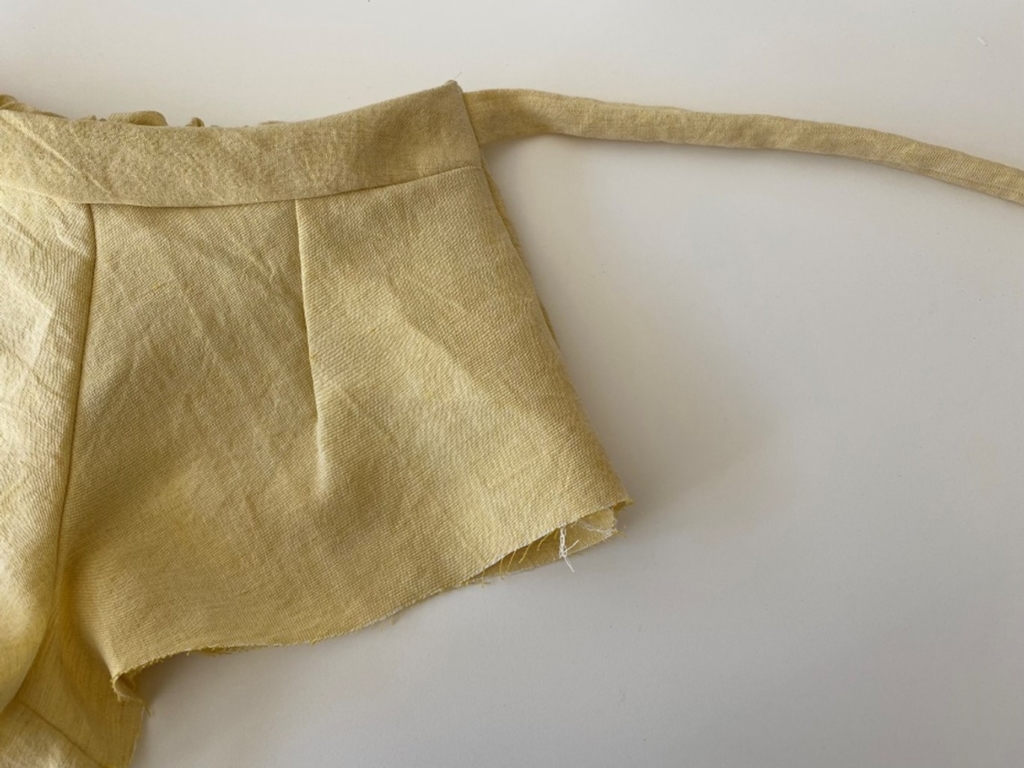 – Sew the top frill on to the under frill with a stay stitch.

– Finish the shaped hems of both frills

– Sew 2 rows of gathering stitches to the frills (as explained in step 2).

– Remove the gathering stitches and finish the seam. 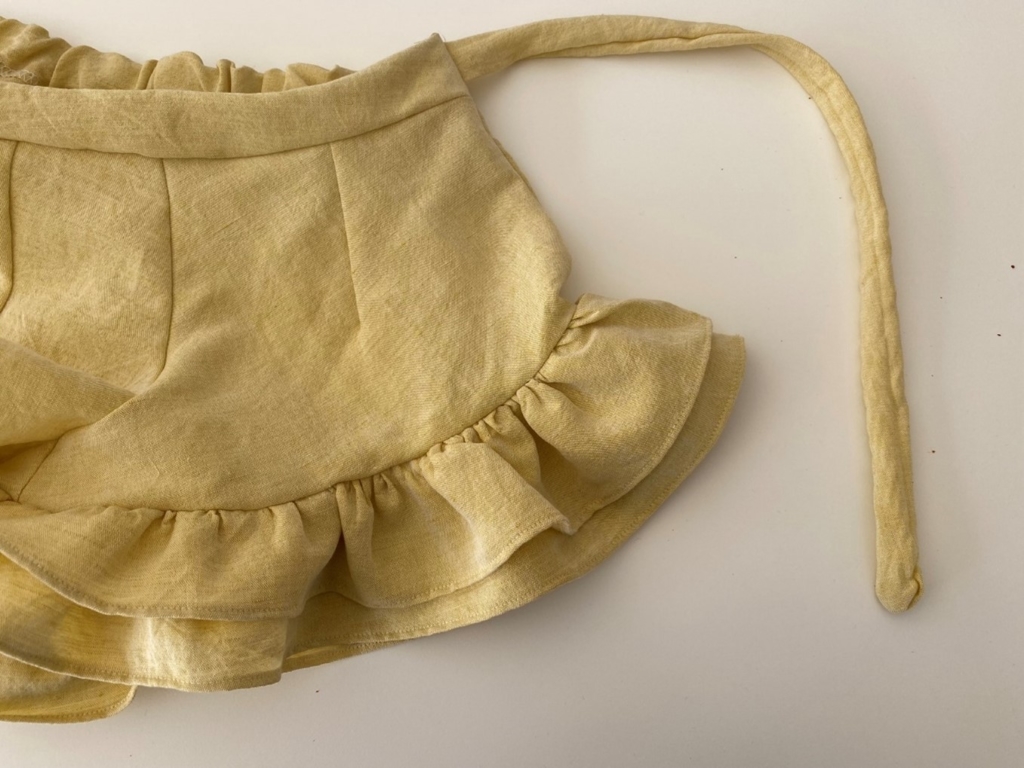 – This frill works the same way as the left side frill, only you don’t close the side seam of the frills (the wider ends stay open)

– Staystitch the top frill to the under frill

– Sew in place, remove the gathering stiches and finish the seam.

– Sew the side seam and finish.

– Turn you short right side out and see that your short has become a skort!

– Press nicely and your skort is finished! 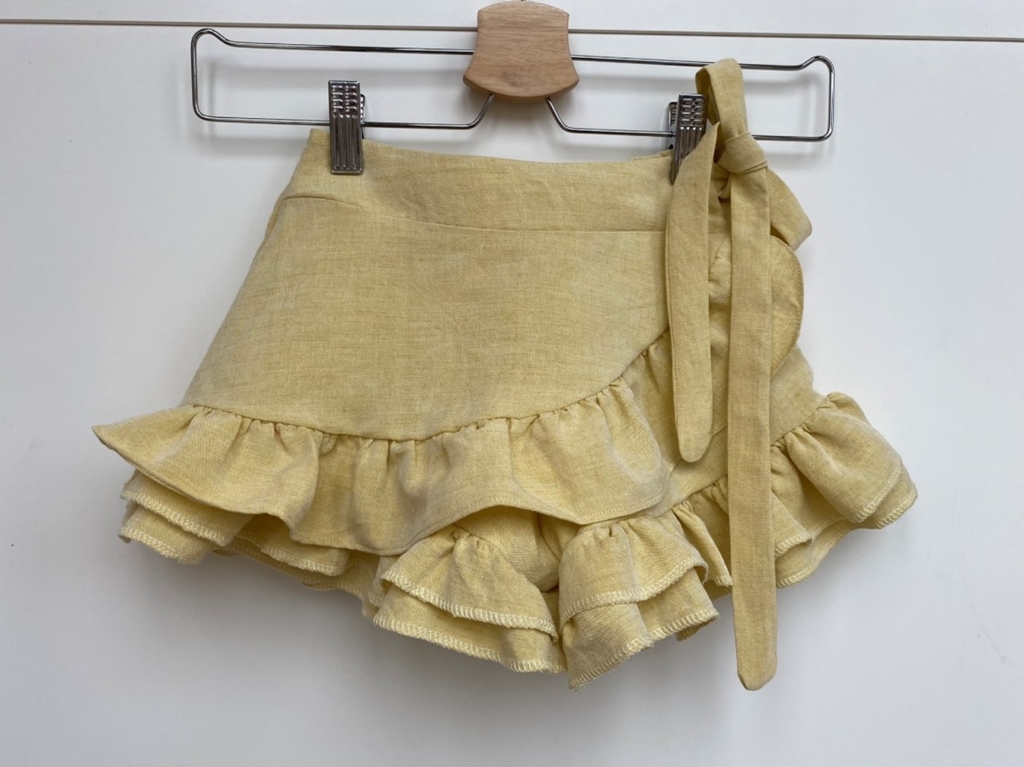 Margot skort paired back with the Harlow knit top below 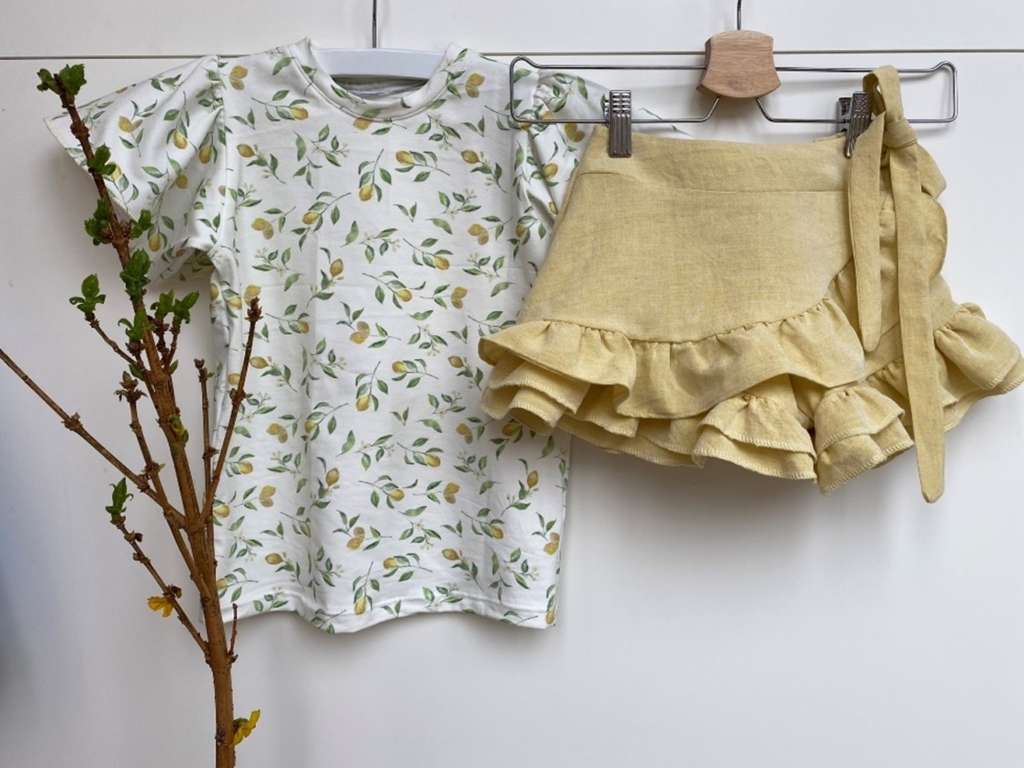 Tutorial by the lovely @nic_combi_naait